OLI Systems has a long history of successfully delivering comprehensive, process modeling solutions for industrial electrolyte and water chemistry applications. Our solutions are used in a variety of industries including oil & gas, power generation, metals & mining, chemicals, and water treatment to design and operate processes more effectively.  The OLI solutions portfolio helps to make engineering users more productive and enhance the efficiency and sustainability of operations while reducing unplanned downtime.

The OLI solution includes a comprehensive chemistry property database, detailed thermodynamic and kinetic models, proven software applications that leverage the power of the OLI Computation Engine together with deep industry applications expertise and sustained research and development.  The schematic below shows the various elements of OLI’s process modeling solution.  The performance of the OLI Engine directly impacts the speed and scalability of the OLI software applications.   In this article, we will take a closer look at how three different numerical techniques have been implemented in the OLI Engine. 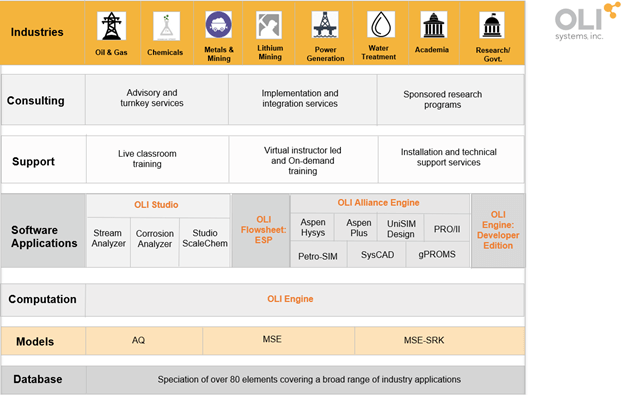 The OLI Engine is the heart of the OLI Solutions portfolio which enables software applications to utilize the property database and thermodynamic models to perform the numerical calculations and deliver process insights.  It is the core computational engine with numerical solvers that has been continually enhanced since OLI’s inception.  In addition to being accessed by the OLI software applications, the OLI Engine can also be accessed by third party simulation software tools and applications with APIs.

Enhancing the performance of the OLI Engine

Over the years, OLI’s computational engine has evolved significantly to deliver more robust convergence, optimal speed, and rigorous, accurate predictions. It has been adapted to take advantage of newer technologies including modern programing languages, advanced solver algorithms, and state-of-art electrolyte thermodynamic frameworks. In this article, we will share one example on how the OLI engine’s performance can be improved by applying different numerical algorithms and open-source technologies.

Numerical differentiation with finite differences is one of the most widely used algorithms. It is fast, simple to implement, but the accuracy depends on the selection of step size. In thermodynamic calculations, differentiation with respect to mixture composition is often required. With compositions of different components that could be varied in different scales, it is difficult to select one suitable step size to satisfy both accuracy and sensitivity for all composition variables.

Analytical differentiation is mostly used to compute accurate function derivative when the function expression is explicit and simple. There are some computer algebra libraries, like SymPy,1 can be used to symbolically differentiate the function which can be programmed into any other languages. Figure 1 below shows an example to evaluate the analytical expression of the Rackett model2 for the temperature derivative of saturated liquid molar volume using SymPy. However, analytical differentiation normally expands the expression comparing to the original function. It requires a non-trivial amount of effort to optimize such algorithms to compete with the performance of numerical or automatic differentiation. 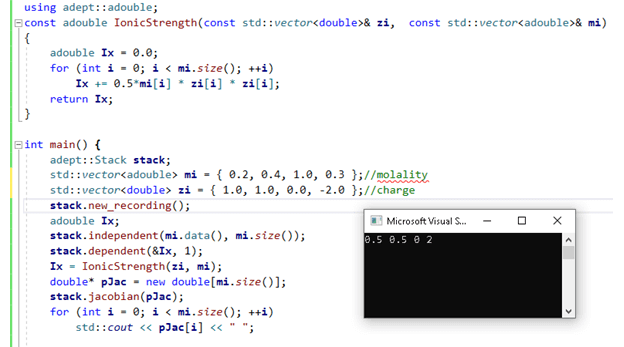