Metal ion binding to natural organic matter is a subject of considerable importance because it can have a large impact on the total metal concentration in surface waters, soil solutions, groundwater, and wastewaters. It will therefore aﬀect metal mobility in these environments. Many widely distributed metals and metalloids in these environments are toxicants that are known to be of health concerns even at lower levels of exposure. Some of them, for instance, lead, mercury, arsenic, cadmium, chromium, and nickel, are also classified as human carcinogens according to the U.S. Environmental Protection Agency, and the International Agency for Research on Cancer [1]. Development of environment-friendly processes for toxic metals removal from wastewater and any aquatic environments is thus of almost importance. Humic acid and fulvic acid are ubiquitous in the environment and represent up to 80% of the total dissolved organics of natural waters. Their peculiar feature is polyfunctionality, which enables them to interact and to form stable complexes with toxic metals of polluted soils and waters. Humic acids and fulvic acids can control metal ion concentration and therefore affect their mobility, bioavailability, and toxicity through formation of complexes in which metal ions bind to these acids. The use of humic acid and fulvic acid for contaminant extraction and removal from environmental matrices has become an attractive concept because of the natural origin of the material and their low pollution potential. Various remediation technologies have been developed for removing toxic metals from wastewaters and industrial effluents using these natural organic acids.

Humic acid and fulvic acid, as major fractions of humic substances found in soils and natural waters, are natural organic substances arising from the biological decomposition of plant and animal materials. Chemically, they are weak acidic polyelectrolytes containing a wide variety of molecular moieties including aromatic rings and alkyl chains bearing a diversity of functional groups. These natural organic acids are macromolecules with undefined compositions that vary according to the origin, process of obtainment, and functional groups present in their structures. Figure 1 illustrates representative structures of humic acid and fulvic acid.

Humic acid and fulvic acid are both soluble in aqueous solutions under different pH conditions. Fulvic acid is soluble in aqueous solution under all pH conditions whereas humic acid is soluble only at high pH in alkaline solutions but precipitates in acid solutions. The remaining fraction of the humic substances, humin, is insoluble at any pH. Fulvic acids, humic acids, and humin can be differentiated by systematic variations in molecular weight, carbon and oxygen contents, numbers of functional groups, acidity, degree of polymerization, and color. Major functional groups that contribute to their chemical reactivities are carboxylic (-COOH) and phenolic (Ar-OH) groups. Figure 2 summarizes key features of these acids. 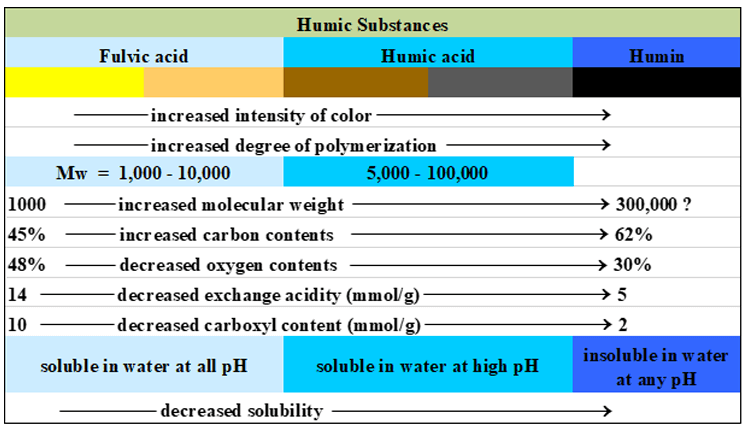 Due to the natural origin of humic acid and fulvic acid, their composition and chemical structure vary with the source and process of obtainment. The molecular units present in these acids (e.g. aliphatic, aromatic, carbohydrates, amino acids/peptides, amines, carboxylic acids, phenols, ketones, aldehydes, furans, pyrroles, sulfonics) may also depend on the degrees of biodegradation and humification undergone by these materials in different environments. The macromolecular and polyelectrolyte nature of humic and fulvic acids, combined with their undefined chemical composition and structures make it a great challenge to describe their chemistry with a conventional model. Successful approach to simulate the chemistry of humic and fulvic acids involves proper identification of critical features and key parameters that can be used to describe the properties of the acids that are important for their interactions with metal ions under varying solution conditions. Analysis based on these critical features can lead to the discovery of trends that are useful to understand behavior of these acids and their complexation with metal ions. Quantitative knowledge of metal ion complexation with humic and fulvic acids is crucial to understand the fate of toxic metal ions through formulation of models that predict how these natural acids control speciation of the contaminants in natural and wastewaters under different conditions. Such knowledge is fundamental for the development of water treatment technologies using humic and fulvic acids.

OLI Systems has developed an approach to simulate humic acid and fulvic acid based on its proprietary Mixed Solvent Electrolyte (MSE) thermodynamic model [5]. In this model, generalized humic acid and fulvic acid have been uniquely created to represent these natural acids from any sources with selected key characteristics. Proton ionization equilibria have been established to represent their acid-base chemistry which provides the foundation for their complexation with metal ions under varying solution conditions. Complexation of humic and fulvic acids has been determined with a number of metal and metalloid ions that are of environmental and health concerns when present in wastewaters or natural waters; these ions include copper(II), lead(II), nickel(II), manganese(II), cobalt(II), iron(II), iron(III), mercury(II), chromium(III), zinc(II), arsenic(III), arsenic(V), aluminum(III), calcium(II), and magnesium(II). The OLI software Platform V10 incorporates the model with a thermodynamic database containing all chemical species that are necessary to enable scientific-based, data-driven, and reliable simulations that can improve the efficiency and environmental friendliness of toxic metal control and removal processes.

How reliable is OLI’s simulation of humic and fulvic acids behavior in aqueous systems?

Humic acid and fulvic acid solutions are complex in nature and their chemical behavior can be affected by a number of variables. Detailed knowledge of the chemical forms of these organic acids in presence of acid, base, and metal ions are of particular interest in natural and wastewater treatment for removal of toxic natural and pollutant ions. Accurate prediction of chemical speciation and their variation with conditions such as solution pH and concentrations of various species present in the systems are essential for the optimal performance of the natural and wastewater treatment process.

The MSE thermodynamic framework in the OLI Software Platform V10 can accurately predict chemical speciation of humic and fulvic acids over wide ranges of pH and concentrations of coexisting salt components, as well as the effects of these variables on metal ion complexation with these acids. Figure 3 shows that the MSE model reliably predicts the amount of Cu(II) complexed with humic acid as a function of solution pH, ionic strength, and total copper concentrations. Copper is known to be toxic to aquatic flora and fauna and to human health at excess level. The availability and toxicity of copper and other heavy metals to organisms strongly depend on their speciation. Biological and chemical interactions of the toxic metals are known to be related to the concentrations of free ions rather than total metal concentrations. The complexation of copper by humic acids and fulvic acids is therefore of great importance for regulating the bioavailability and toxicity of the metal. Results from the MSE model provide insights to using humic and fulvic acids in mitigating the toxicity of copper or other metal ions in water treatment processes.

Arsenic (As) is a widely distributed toxic element in the surface and ground waters as a result of geochemical processes associated with arsenic-containing minerals and as anthropogenic pollutants from industrial and agricultural activities. Release of arsenic to the environment poses threats to the human health because of its high toxicity (https://www.linkedin.com/posts/jiangping-liu-b57b802a_oilandgas-mining-chemistry-activity-6664593768727015424-s5WG). Humic and fulvic acids are known to form stable complexes with arsenic, thus influencing its mobility, bioavailability, and toxicity. In the aquatic environment, inorganic As occurs as arsenite (As(III)) or as arsenate (As(V)). The MSE model predicts a strong binding of humic acid and fulvic acid with As(V) compared to As(III) which is in excellent agreement with experimental data, as demonstrated in Figure 4. Different binding affinities of humic and fulvic acids toward arsenite and arsenate makes it possible for developing more efficient arsenic removal technologies under changing redox conditions in aerated or deaerated environment. 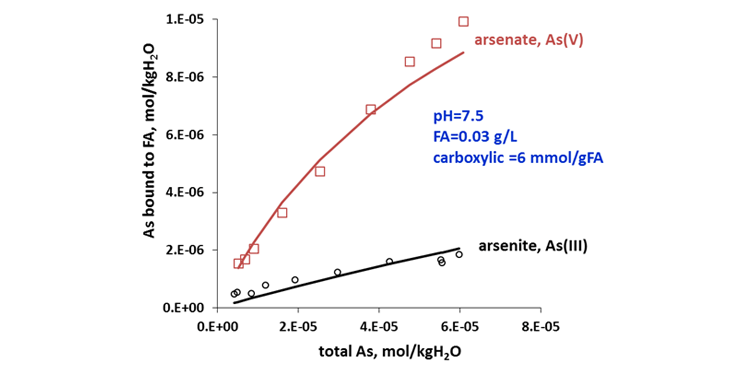 Figure 4. Binding efficiency of fulvic acid with arsenite and arsenate

What tools are available for simulating toxic removal by humic and fulvic acids?