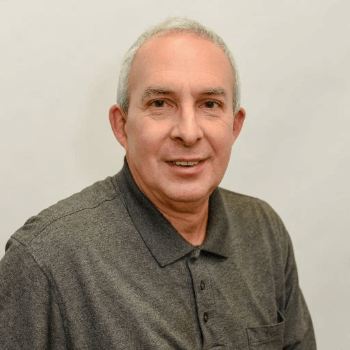 The Importance of Urea as a Commodity Chemical

Since Friedrich Wöhler’s discovery in 1828 that it can be synthesized from inorganic starting compounds, urea has made massive strides to become an integral component of farming and industrial operations. Worldwide usage of urea has increased more than 100-fold in the past four decades and now constitutes over 50% of global nitrogenous fertilizer usage.

Beyond the agricultural sector, urea finds miscellaneous applications in chemical, automobile, and biomedical industries. It is a raw material for urea-formaldehyde resins and urea-melamine-formaldehyde used in marine plywood. Urea is used to make urea nitrate, a high explosive used industrially, and some improvised explosive devices. It is a stabilizer in nitrocellulose explosives. In the automobile sector, urea is used in Selective Non-Catalytic Reduction (SNCR) and Selective Catalytic Reduction (SCR) reactions to reduce the NOx pollutants in exhaust gases from the combustion of diesel. Urea is also used extensively in animal feeds, a relatively cheap source of nitrogen to promote growth. Urea is a key component of topical dermatological products to promote rehydration of the skin. It is also used in hair conditioners, shampoos, tooth whitening products. Urea has also been studied as an excipient in Drug-coated Balloon (DCB) coating formulation to enhance local drug delivery to stenotic blood vessels.

Since urea is a commodity chemical, optimizing yields and reducing processing costs are critical for chemicals and fertilizer manufacturing companies. Process modeling and simulation have an important role in making urea processing more efficient and effective.  From a simulation standpoint, while there is an abundant amount of experimental data on the behavior of urea under various conditions, its chemical behavior at high temperatures under the effect of temperature and pressure is very complex and particularly difficult to simulate without a rigorous and accurate model.

OLI Systems has developed a comprehensive thermodynamic model to predict the properties needed to model the urea process. The model is based on OLI’s proprietary Mixed Solvent Electrolyte (MSE) thermodynamic framework (1). The properties include vapor – liquid – solid phase equilibrium, urea conversion chemical equilibrium, speciation, enthalpies, and heat capacities for mixtures containing water, ammonia, carbon dioxide and urea. Several impurities are also included in the model. The properties cover a wide range of temperature, pressure and composition that are needed to model the process. Several diagrams are given that compare the MSE model predictions to experimental data demonstrating the accuracy of the model in capturing some of these key properties.

Urea is produced from ammonia and carbon dioxide. There are various commercial urea processes, but they all consist of two main equilibrium reactions.

The first is carbamate formation: the fast exothermic reaction of ammonia with carbon dioxide at high temperature and pressure to form ammonium carbamate:

The second is urea conversion: the slower endothermic decomposition of ammonium carbamate into urea and water:

Because the urea conversion is incomplete in the reactor, the product must be separated from the reaction mixture. This involves several strippers/decomposers operating at progressively reduced pressures. The unconverted carbamate is decomposed back to ammonia and carbon dioxide and recycled. The urea solution is concentrated by evaporation or crystallization, to yield pure urea.

The model was developed by analyzing binary, ternary, and quaternary data for the water, ammonia, carbon dioxide and urea system. The two plots below show the equilibrium conversion to urea at typical reactor conditions for various ratios of ammonia to carbon dioxide. The first plot has no added water while the second plot has added water equal to half of the carbon dioxide. 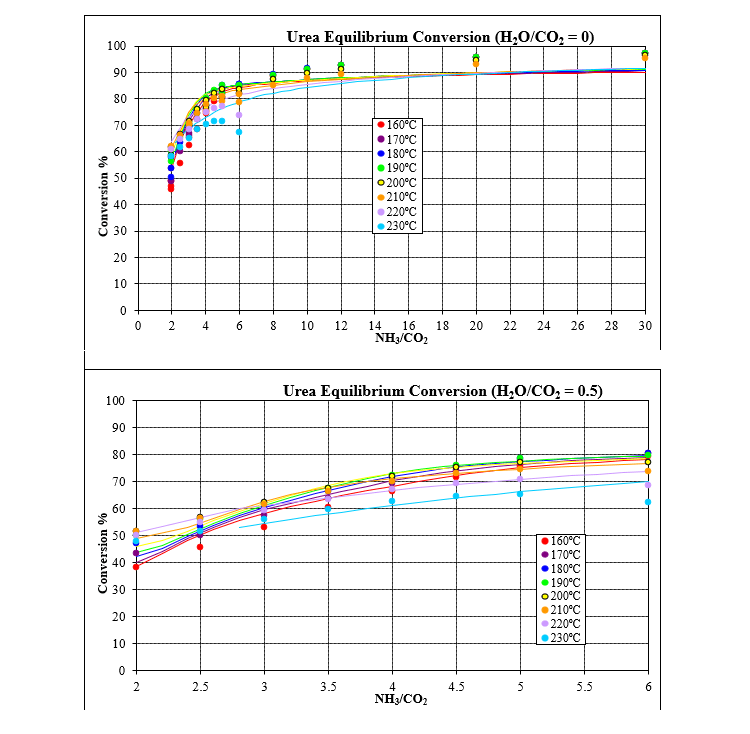 The plot below shows the urea equilibrium conversion pressure at typical reactor conditions for various ratios of ammonia to carbon dioxide.

Finally, the plot below shows the solubility of urea in water.

The diagrams given above show the MSE model can accurately predict the properties needed to model the urea process over a wide range of temperature, pressure, and compositions. Specifically, the model can predict the effect of temperature, pressure, ratio of ammonia to carbon dioxide, and the amount of water on the equilibrium conversion to urea in the reactor. This is one of the most important and challenging aspects of simulating and optimizing the urea manufacturing process. Additional plots that illustrate the model predictions are available in validation spreadsheets.

The OLI System’s thermodynamic property package, which implements the MSE model with the capability to model the urea process is currently available in OLI Studio V10 and OLI Flowsheet ESP V10.